Learn about the most basics coroutines concepts

This series of blog posts goes in-depth into cancellation and exceptions in Coroutines. Cancellation is important for avoiding doing more work than needed which can waste memory and battery life; proper exception handling is key to a great user experience. As the foundation for the other 2 parts of the series (part 2: cancellation, part 3: exceptions), it’s important to define some core coroutine concepts such as CoroutineScope, Job and CoroutineContext so that we all are on the same page.

If you prefer video, check out this talk from KotlinConf’19 by Florina Muntenescu and I:

A CoroutineScope keeps track of any coroutine you create using launch or async (these are extension functions on CoroutineScope). The ongoing work (running coroutines) can be canceled by calling scope.cancel() at any point in time.

You should create a CoroutineScope whenever you want to start and control the lifecycle of coroutines in a particular layer of your app. In some platforms like Android, there are KTX libraries that already provide a CoroutineScope in certain lifecycle classes such as viewModelScope and lifecycleScope.

When creating a CoroutineScope it takes a CoroutineContext as a parameter to its constructor. You can create a new scope & coroutine with the following code:

A Job is a handle to a coroutine. For every coroutine that you create (by launch or async), it returns a Job instance that uniquely identifies the coroutine and manages its lifecycle. As we saw above, you can also pass a Job to a CoroutineScope to keep a handle on its lifecycle.

The CoroutineContext is a set of elements that define the behavior of a coroutine. It’s made of: 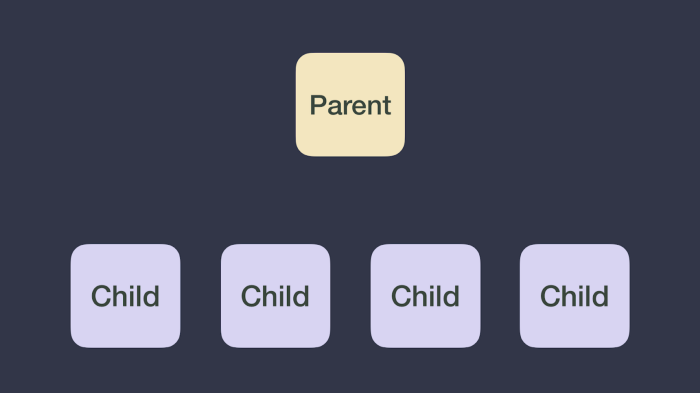 Coroutines are executed in a task hierarchy. The parent can be either a CoroutineScope or another coroutine

A Job can go through a set of states: New, Active, Completing, Completed, Cancelling and Cancelled. While we don’t have access to the states themselves, we can access properties of a Job: isActive, isCancelled and isCompleted. 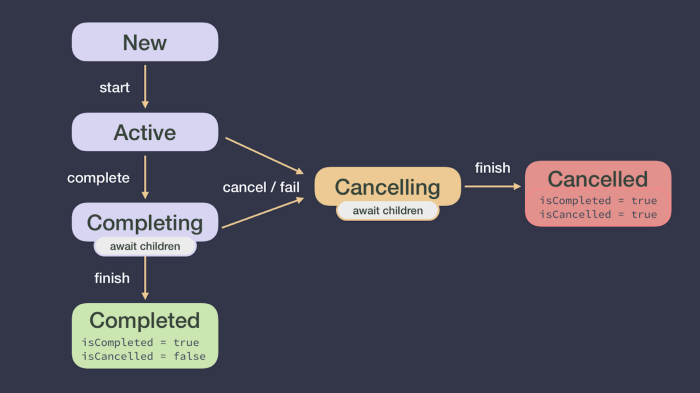 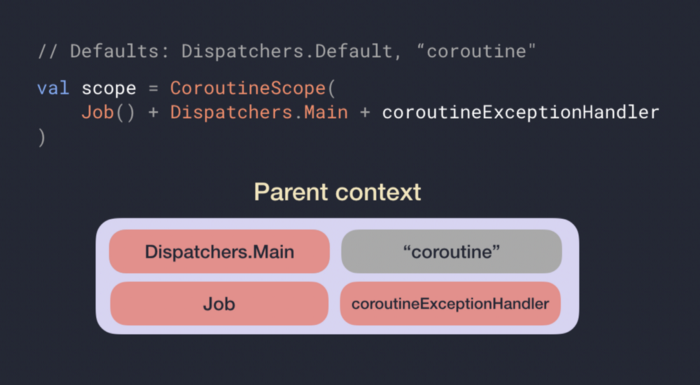 Every coroutine started by this CoroutineScope will have at least those elements in the CoroutineContext. CoroutineName is gray because it comes from the default values.

If with the CoroutineScope shown in the image above we create a new coroutine like this: 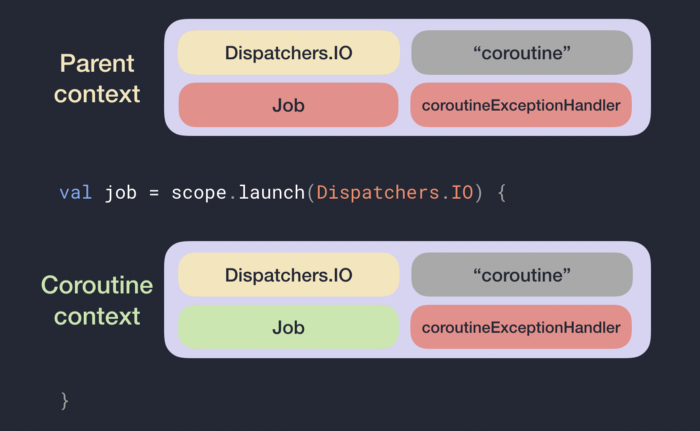 Now that you know the basics of coroutines, start learning more about cancellation and exceptions in coroutines with part 2 for cancellation, part 3 for exceptions, and part 4 for work that shouldn’t be cancelled.