Learn more about how coroutines are executed in the JVM and concurrency problems.

“Coroutines are light-weight threads”, how many times have you read that? Does that mean anything to you? Probably not. Keep reading to learn more about how coroutines are actually executed in the JVM, how they relate to threads, and the concurrency issues that are inevitable when using the JVM threading model.

Coroutines aim to simplify code that executes asynchronously. When talking about coroutines in the JVM, the block of code passed as a lambda to a coroutine builder ultimately gets executed on a specific JVM thread. For example, this simple Fibonacci calculation:

The above async coroutine’s block of code, that performs a synchronous and blocking fibonacci calculation and saves it to memory, gets dispatched and scheduled for execution in a thread pool managed by the coroutines library, the one configured for Dispatchers.Default. The code will be executed in a thread of the thread pool at some time in the future depending on the thread pool’s policies.

Note that the code above executes in one thread because it doesn’t suspend. It’s possible for one coroutine to be executed in different threads if the execution is moved to a different dispatcher, or if the block contains code that may yield/suspend in a dispatcher that uses a thread pool.

Similarly, without coroutines, you could execute the logic above using threads manually as follows:

While doing things on your own managing thread pools manually is possible, coroutines is the recommended solution for asynchronous programming on Android due to the built-in cancellation support, easier error handling, structured concurrency which reduces the likelihood of memory leaks, and its integration with Jetpack libraries.

If you read my article about how coroutines work under the hood, you already know that the compiler creates a state machine, and the information of the state machine (e.g. what needs to be executed next) is kept in a Continuation object.

In case a Continuation needs to be executed in a different Dispatcher, the DispatchedContinuation’s resumeWith method is in charge of dispatching the coroutine to the appropriate one! 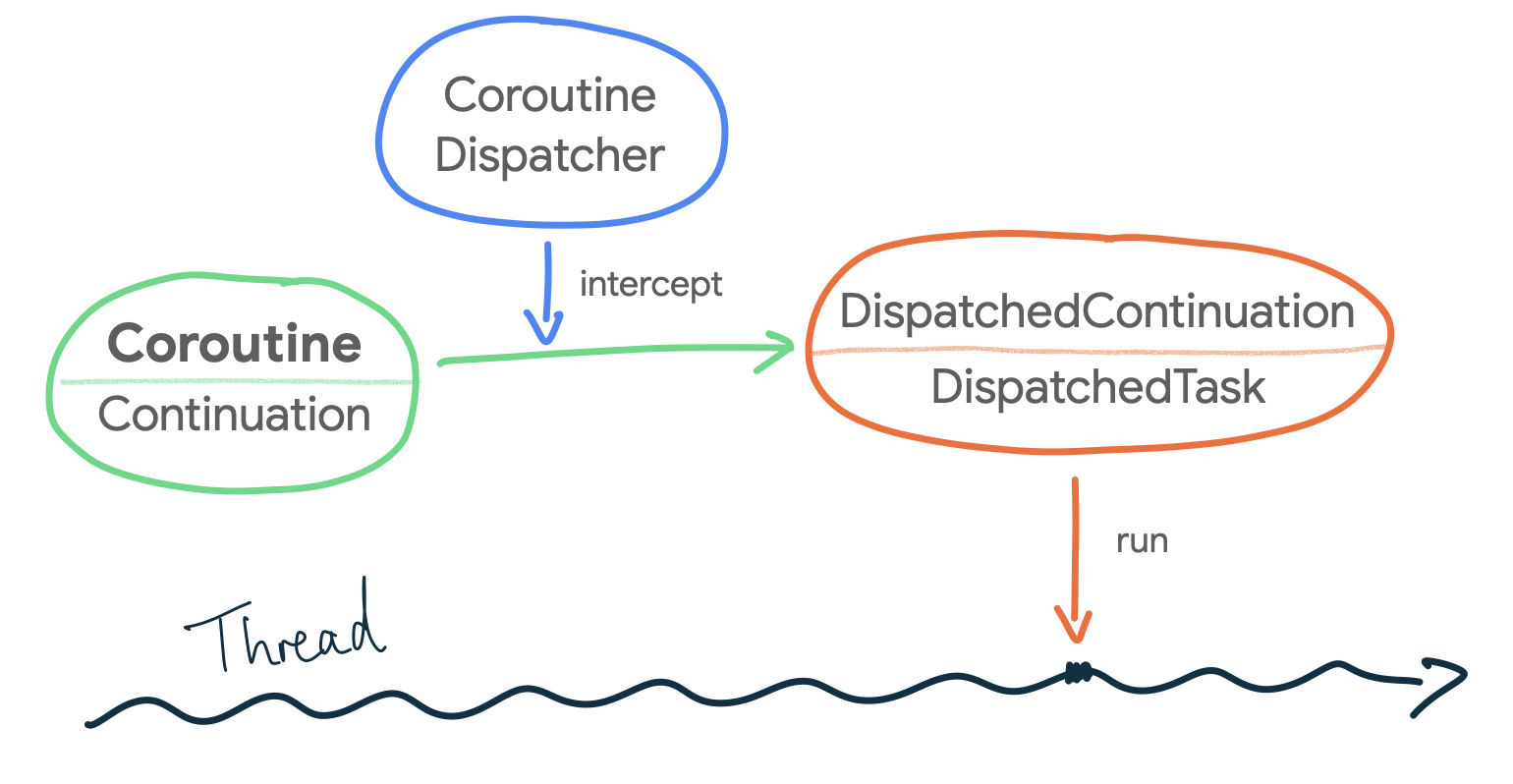 In the JVM, if there are more threads created than CPU cores available, switching between threads carries some runtime overhead. Context switches aren’t cheap! The OS needs to save and restore the execution context, and the CPU needs to spend time scheduling threads instead of running actual app work. Apart from that, context switches may happen if a thread is running code that blocks. If that’s the case for threads, is there any performance penalty of using withContext with different Dispatchers?

Fortunately, as you could imagine, thread pools manage all of this complexity for us, trying to optimize work to be executed as much as possible (that’s why executing work on a thread pool is better than doing so in threads manually). Coroutines also benefit from this as they’re scheduled in thread pools! On top of that, coroutines don’t block threads, they suspend their work instead! Even more efficient!

The CoroutineScheduler, which is the thread pool used in the JVM implementation by default, distributes dispatched coroutines to worker threads in the most efficient manner. As Dispatchers.Default and Dispatchers.IO use the same thread pool, switching between them is optimized to avoid thread switches whenever possible. The coroutines library can optimize those calls, stay on the same dispatcher and thread, and follow a fast-path.

Coroutines DO make asynchronous programming easier due to how simple scheduling work on different threads is. On the other hand, this simplicity can be a double-edged sword: as coroutines run on the JVM threading model, they cannot simply escape from the concurrency problems that the threading model entails. Thus, you have to pay attention to avoid this.

Over the years, good practices like immutability have mitigated some of the thread-related issues that you can face. However, there are some cases that cannot be avoided with immutability. The mother of all concurrency problems is state management! In particular, accessing mutable state in a multi-threaded environment.

The ordering of operations in a multi-threaded app is unpredictable. Apart from compiler optimizations that can reorder operations, threads are not guaranteed to be run in a particular order, and context switches can happen at any time. If the necessary precautions are not taken when accessing mutable state, threads could see stale data, lose updates, or suffer from race conditions among other things.

Note that the discussion of mutable state and access order isn’t specific to the JVM. They affect coroutines on other platforms, too.

An app using coroutines is a multi-threaded app by nature. Classes that use coroutines and contain mutable state must take precautions to be predictable, i.e. ensure the code executed in coroutines see the most up-to-date version of the data. In this way, different threads won’t interfere with one another. Concurrency issues can lead to very subtle bugs very hard to debug in your apps, even heisenbugs!

These types of classes are not uncommon. Maybe the class needs to keep the information of the logged-in user in memory, or cache some values while the app is alive. Concurrency issues can still happen in coroutines if you’re not careful! A suspend function using withContext(defaultDispatcher) is not guaranteed to be executed always in the same thread!

Let’s say we have a class that caches transactions made by users. If the cache is not accessed properly, like for example below, concurrency bugs can happen:

Even if we’re talking about Kotlin, the book Java concurrency in practice by Brian Goetz is a great resource to learn more about this topic and the intricacies of concurrency in JVM systems. Alternatively, Jetbrains has documentation about shared mutable state and concurrency too.

How to protect mutable state, or find a good synchronization policy, totally depends on the nature of the data and the operations involved. This section is about bringing awareness of the concurrency issues you can face instead of listing all the different ways and APIs to protect mutable state. Nonetheless, here’s some tips and APIs you can start with to make your mutable variables thread-safe.

Mutable state should be encapsulated and owned by a class. This class centralizes access to the state, and will protect reads and writes with the synchronization policy that better fits the use case.

A solution can be to restrict read/write access to one thread. Access to the mutable state can be done in a producer/consumer way using a queue. JetBrains has good documentation about this.

In the JVM, there are thread-safe data structures you can use to protect your mutable variables. For example, for the case of a simple counter, you can use AtomicInteger. Or, to protect the map of the code snippet above, you could use a ConcurrentHashMap. ConcurrentHashMap is a thread-safe, synchronized collection that optimizes the throughput of reads and writes to the map.

Note that thread-safe data structures don’t guard against caller ordering problems, they just make sure memory access is atomic. They help avoid using locks when the logic is not too complicated. For example, they can’t be used in the transactionCache example shown above because the order of operations and the logic between them need thread and access protection.

Also, data in these thread-safe data structures needs to be immutable or protected to prevent race conditions when modifying objects already stored in them.

If you have compound actions that need to be synchronized, @Volatile variables or thread-safe data structures won’t help! And it’s possible that the built-in @Synchronized annotation is not granular enough to make your use case efficient.

In those cases, you might need to create your own synchronization mechanism using concurrent utilities such as latches, semaphores, or barriers. Other times, you can unconditionally protect multi-threaded access to code using locks or mutexes.

A Mutex in Kotlin has the suspend functions lock and unlock to manually protect parts of your coroutines code. Conveniently, the extension function Mutex.withLock makes it easier to use:

As a coroutine using Mutex suspends execution until it can proceed, it’s much more efficient than a JVM lock that blocks the thread. Be careful about using JVM synchronization classes in coroutines as that can block the thread in which the coroutine is being executed and create liveness issues.

The block of code passed to a coroutine builder ends up executing on one or multiple JVM threads. And as such, coroutines run on the JVM threading model with all its constraints. With coroutines, it’s still possible to write vulnerable wrong multi-threaded code. So, watch out for access to shared mutable state in your code!